The most commonly produced piezoelectric ceramics include barium titanate ( BaTiO3 ), lead titanate ( PbTiO3 ) and lead zirconate titanate ( Pb(ZrTi)O3, PZT ). PZT belongs to perovskite crystal structure with the general formula ABO3. The atom location of PZT in perovskite structure is shown in Figure 1. The asymmetric location of Ti or Zr in the unit cell generates an electric dipole moment. The piezoelectric ceramic after sintering consists of a great number of small grains. Each grain can be divided into many domains where the dipole directions of unit cells in a domain are the same. Due to random orientations of grains after sintering, the net polarization of the ceramic is zero, i.e. the material does not exhibit piezoelectric properties. 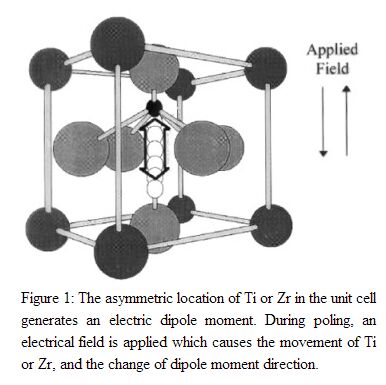 The manufacture of piezoelectric ceramics involves exposing the ceramic to high temperature while imposing a high electric field intensity in a desired direction to create the piezoelectric properties. It is termed ‘poling’. PZT during poling, for example, an electrical field is applied which causes the movement of Ti or Zr, and the change of dipole moment direction. The randomly oriented dipole domains will be aligned during poling, therefore, the polarization of the PZT ceramic part is established as shown in Figure 2. Piezoelectric ceramics have high efficiency in the transformation between mechanical and electrical energies. They have become well established as the preferred material for a wide variety of electromechanical devices and will play more roles when the need of human-machine-environment interaction increases. Their applications include: